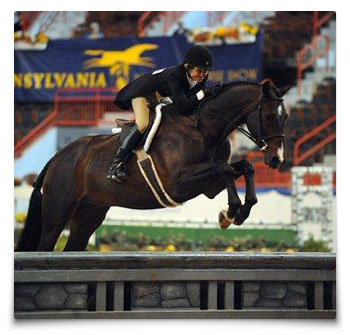 Gucci showed off plenty of style on his way to fourth place in the NAL Adult Amateur Hunter Finals with Judy Lefferdink aboard.

It’s easy to appreciate clients like Judy Lefferdink and her horse Gucci. At Heart Equine we are fortunate to work with many people that are very invested in their horse’s care.

“I believe that when you purchase a horse, you need to accept full responsibility for educating yourself as to his care, maintenance, conditioning, and general well being. I am fortunate to have a wonderful support team that helps educate me on my horse’s needs.”

When Judy purchased Gucci he already had some back and hind end soreness. Their trainer Paula Thon contacted Heart Equine for an initial assessment July 2008. This horse is a hard working athlete in a good program but there were issues that would eventually cause problems if not addressed. On the plus side, if taken care of, this horse could be better than he was!

Gucci’s presenting complaints were actually quite routine in the sport horse world but his owner and trainer recognized that these problems may be rooted in back pain. Gucci was tough with his right side in training and was bad for the farrier with his left hind. Gucci also had anxiety on the cross ties.

Evaluation of GUCCI’s standing posture showed that he placed his right hind leg under his body closer to the midline and he seemed to bear more of his weight behind on his left hind leg. He was also very heavy on his right front leg and became nervous and unbalanced when the right front leg was picked up and extended forward. He also did not like to extend either of his rear limbs but seemed less comfortable when asked to stand on his right hind leg . In other words Gucci did not stand ‘square’ and was not balanced. His back was also very weak and the muscle tone in his back was of poor quality. The lumbar vertebra of his back were all pushed together and fixated – Gucci’s lower back had very little mobility and he had the muscle spasms to go along with it.

The work that was done on Gucci initially consisted of chiropractic adjustments and then acupuncture was introduced. Gucci needed to lengthen out in his back and become strong in this position so he could maintain both strength and flexibility over fences. A strong back helps to maintain the pelvis orientation so it does not get too steep and brings the rear legs too far under the horse. A syndrome Gucci and many jumping horses are prone too. Paula had a good understanding of the work I was doing on Gucci and was able to adapt her training program to help strengthen and not overuse the weak areas.

Here is how Judy describes Gucci’s initial experience: “He responded well immediately, and quickly came to realize that Dr Heart was helping him feel better, have less pain, and become more of an athlete.”

In 2009 Gucci’s show schedule started to increase and this horse started to show signs of soreness at his appointments. He was evaluated at each appointment using diagnostic acupuncture point sensitivities to assess his sore areas. When Gucci would want to sit down behind when those points were touched we knew that we were not staying ahead of the pain and that we needed to pay attention to what this horse was telling us. Sometimes in a case like this when the horse does appear painful at the onset of each appointment it means there could be an underlying injury or that the horse is in the wrong training program. In Gucci’s case we were able to rule out both of these possibilities and decided to decrease the time between appointments and see if we could keep this horse on schedule and happy. Previously we had seen Gucci at 4 to 8 week intervals and we moved him up to 3 week intervals for a few appointments. Judy is very involved with Gucci’s care and she also understands the process of managing an athlete, this is how she describes her experience:

“It was hoped that the treatments would not only improve his condition, but allow him to maintain his adjustments and rather than be reactive to his weaknesses we would be pro-active. After several months of increased treatments, he was able to maintain his show schedule while also maintaining his flexibility, strong use of his hind end, and easier adjustability. I could always tell a difference in his willingness to engage his hind end and his willingness to “give” to the bridle after an adjustment even in the beginning, but the further along in the treatments we were, the easier he was to ride and his willingness increased.”

Gucci competed consistently throughout the summer and fall and started to look better and better with each appointment. He stands square and strong behind now and has not been difficult for the farrier in many months. He is relaxed and confident on the cross ties and will hold his head down. He easily extends all four limbs and stands square and balanced on the other three when doing so. Gucci continues to deal with a number of minor issues at each appointment but these do not turn into painful problems that cause him to compensate his movements. This program has allowed this horse to stay very consistent in his performances and his scores at the shows reflected this. Gucci’s response to his program has made all members of his support team look good this year – it is a real success when a horse can finish a show season happier and stronger than when he started. Gucci was seen mid December, the day after a horse show and had been last seen just prior to shipping to show indoors in Harrisburg, PA eight weeks ago. He looked great, felt strong in his back and reportedly has been training well. It has been a real pleasure to watch this horse develop into such a reliable, athletic sport horse. He gives back to his owner as she gives to him – but Judy of course says it best:

“Dr. Heart has educated me and allowed us to be all that we can. As a result, GUCCI is leading the USEF Zone V for the amateur adult hunter division for 35 years and older, he was second in points nationally for the Marshall & Sterling Adult hunters, placed 2nd in the Midwest Marshall & Sterling Adult Hunter Finals Classic, and was 4th in Harrisburg, Pennsylvania in the NAL Adult Hunter Finals in October.

All of this was made possible by making sure he was comfortable, relaxed, and able to perform to the best of his ability, given the amateur rider he was dealing with. Seriously, our horses are such valuable partners and friends in our lives, the least we can do is help them in any way we can… it’s all about giving back.”